The 132-year history of the Bremen Enquirer

Note: This article was first posted December 17, 2018. It has been updated and improved with new research.

Bremen’s paper of record, The Bremen Enquirer, was founded in November of 1885 by Brook H Bowman (1858-1931). 2018 marked the end of that 132-year run, as the paper is combined with other local papers in the Pilot-News Group and rechristened Heartland News.

One of the first things Bowman (probably pronounced BAU-man and not BOH-man) did was catalog the businesses present in Bremen at the time. A long article listed the likes of JR Dietrich’s dry goods and grocery, John Huff’s furniture and undertaking, WF Schilt’s flour mill, and August Dettbrenner’s blacksmith shop, as well as the various shoemakers, barbers, dressmakers, saloons, churches, and even newspapers. Notably, unlike most newspapers of the time, the Enquirer would be entirely non-political. Plymouth, for example, had the Democrat, the Republican, and the Independent, as well as the Pilot, which rolled presses in 1851.

Bowman did, however, take a strong stand against cows being allowed to roam the town freely.

Bremen already had a newspaper as well, one run by grocers and brothers George & Lee Sunderland called The Bremen Banner. Bowman and the Sunderlands didn’t get along, and their animosity sometimes spilled over into the pages of their periodicals with items like “Lee Sunderland Once More Shoots off his Bazoo”. But the Banner eventually folded, and other rags came and went as well. The Enquirer stayed, albeit always run on a shoelace. At times, the paper advertised subscriptions in exchange for firewood.

Bowman sold the paper to Caleb “Cal” Sinninger (1854-1934) in 1890. Sinninger had helped gather stories and put the paper together since the beginning and came back to town from a stint at a Peru, Illinois, newspaper. He wore an outrageous mustache and called himself “The Bremen Hustler”. He boosted the town and championed a water works and the standpipe and other improvements, just as Bowman had.

But in December of 1892, Sinninger was brutally attacked by Louis Velner/Wilmer while conducting business in Hoople’s saloon. Allegedly at the urging of the Sunderlands, Vilmer kicked Sinninger in the groin then, when he was down, several times in the stomach and face. It took two years, but Sinninger won a $200 suit against his attacker in Elkhart circuit court, but Sinninger carried a pistol ever after.

In the meantime, his wife horsewhipped AG Baker, the editor at the rival Bremen Standard, for claiming the couple still owed money on her wedding dress from 10 years earlier. Baker claimed her husband covered the staff with a revolver but that the missus “failed, simply because that gentleman would not submit”, which frankly sounds like bunkum. Soon, the Sinningers left town, and Brook Bowman returned to Bremen to take over. (Their daughters Beryl and Ida remained in Bremen, Ida having married Ed Nufer in 1888 and, after his death, Jackson Yockey in 1892.) Cal Sinninger bounced from newspaper to newspaper in Indiana and southern Michigan for years.

In 1902, Bowman again sold the paper, this time to Charles Scott, another local who had been involved in the publishing for some time. Scott sold out to Otto Fries (1879-1935) in 1907, someone who had helped run the paper for a time and had aspirations of being a cartoonist. Both hoped to raise the paper to “a higher plane” and to mold opinion. Like Bowman, one of the first things Fries (pronounced FREEZ) did was to document the town. He published an extensive history in December of 1907 that, along with Bowman’s from 1887, serves as a primary source for the early history of the town.

In 1909, Otto Fries sold the paper to Samuel M Gorrell (1859-1925), who came from Wells county and had recently run the Knox County Democrat.

Gorrell (pronounced gor-EL) built the Enquirer building at 126 E Plymouth St in 1911; previously, the paper had been run out of second-floor offices in more-or-less whatever building offered the cheapest rent.

Gorrell published with the help of his sons, particularly James K “Kenny” Gorrell (1887-1967), to whom he passed it along in 1919, retaining ownership until his death in 1925. (Sam’s other son Stuart Gorrell roomed with Hoagy Carmichael and, in 1930, co-wrote “Georgia on My Mind”.) The Gorrells modernized the paper. Gone were the humorous asides and snide blind items about fistfights or chewing gum or girls dressing as boys. Previously, the outfit rarely had the wherewithal to run its own photos or engravings.

Ken Gorrell ran the newspaper until his retirement in 1959, building it, in his 40 years as editor, into a respected publication honored as one of the six best by the Indiana State Weekly Press Association.

The paper was sold to his daughter and her husband: Jane and James Crittenden, who ran it as Enquirer Publishing Co. In 1967, they sold it to Pilot-News Group out of Plymouth, who has retained ownership ever since. 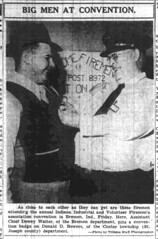 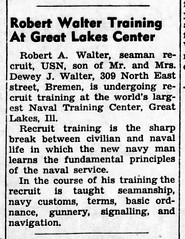